The murder of Kyle Dinkheller is probably one of the worst videos that I have ever seen. It isn’t so much what you see on the video as it is what you hear.

The killer, Andrew Brannon, was sentenced to death over 13 years ago and is STILL appealing his death sentence.

So much for the death penalty being quick in the American South.

Outline where Deputy Kyle Dinkheller’s body was found. The blood stains are indicative of where he was hit. 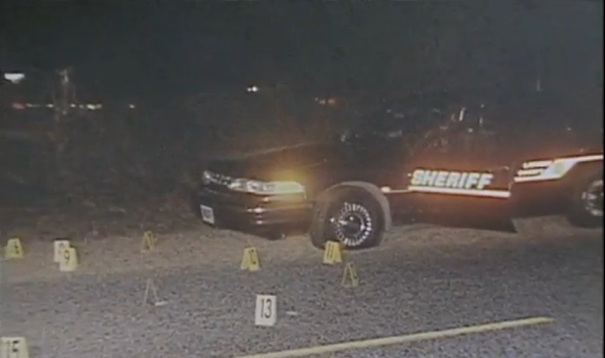 Numbered placards indicating where shell casings landed during the gunfight

What Deputy Dinkheller’s car may have looked like from the Andrew Brannon’s perspective.

From the court transcripts at http://caselaw.findlaw.com/ga-supreme-court/1197164.html

1. The evidence presented at trial showed the following:  Andrew Brannan left his mother’s house in Stockbridge, Georgia, to drive to his house in Laurens County in the afternoon of January 12, 1998.   He was driving his white pickup truck 98 miles per hour on Interstate 16 when Laurens County Deputy Sheriff Kyle Dinkheller clocked his speed with a radar gun.   Brannan exited the highway and stopped on a rural stretch of Whipple Crossing Road after the deputy caught up to him.   During the pursuit, Deputy Dinkheller activated a video camera which is aimed through his windshield.   The camera captured almost all of Brannan’s actions during the ensuing traffic stop.   Deputy Dinkheller also wore a microphone.   The deputy stopped his patrol car about 20 feet behind Brannan’s truck.   Brannan exited his truck and stood near the driver’s side door with his hands in his pockets.   The right side of Deputy Dinkheller is visible on the tape as he stood next to his driver’s side door.

Deputy Dinkheller said, “Driver, step back here to me.   Come on back here to me.”   Brannan said, “Okay,” but did not move.   The deputy said, “Come on back.   How are you doing today?”   Brannan said that he was okay and asked how the deputy was doing, but still did not move.   Deputy Dinkheller said he was good and repeated, “[C]ome on back here and keep your hands out of your pockets.”   Brannan asked why and the deputy again said, “Keep your hands out of your pockets, sir.”   Brannan responded, “Fuck you, Godamit, here I am.   Shoot my fucking ass.”   He then began dancing in the street, saying, “Here I am, here I am.”   The deputy ordered, “Come here.   Sir, come here,” but Brannan responded, “Shoot me,” and kept dancing.

Deputy Dinkheller radioed for assistance on his belt-mounted radio, and the defendant stopped dancing and approached him.   The deputy said, “Sir, get back.”   Brannan replied, “Who are you calling, motherfucker?” and then rushed the deputy and a confrontation ensued to the left of the patrol car and off camera.   The deputy ordered Brannan to get back nine more times.   Brannan replied with “Fuck you” four times and at one point shouted, “I am a goddam Vietnam combat veteran.”

Brannan then ran back to his truck and began rummaging around behind the driver’s seat.   Deputy Dinkheller remained beside his patrol car and ordered, “Sir, get out of the car.”   The right side of the deputy is briefly visible during this time.   The deputy had drawn his baton, but not his firearm.   Brannan replied that he was in fear of his life.   The deputy shouted, “I’m in fear of my life!   Get back here now!”   Brannan said, “No,” and then pulled a .30 caliber M 1 carbine from his truck.   The deputy radioed for help and shouted for him to put the gun down.   Instead, Brannan crouched by his open driver’s side door.   The deputy shouted for Brannan to put the gun down three more times.   Brannan opened fire and the deputy returned fire.

Deputy Dinkheller was hit and shouted, “Shoot, shoot, stop now!”   Brannan continued firing and advanced to the front of the patrol car.   The deputy apparently tried to take cover behind the patrol car.   Brannan exhausted one magazine, reloaded, and continued firing.   The microphone recorded the sounds of the deputy being shot. At trial, the medical examiner testified that by this time Deputy Dinkheller had been struck by at least nine bullets, in the arms, legs, buttocks, chest, and head.   The medical examiner opined that the deputy, although still breathing into the microphone, had lost consciousness because he was no longer returning fire or crying out when shot.   The video shows Brannan cease crouching, take careful aim with his carbine, say “Die, Fucker,” and fire one last shot.   Brannan then fled the scene in his truck.

Brannan was found hiding in the woods about 100 yards from his house, and he made incriminating statements after his arrest.   He had a gunshot wound to his abdomen.   The police found the murder weapon in his house.

33 comments on “The Murder of Deputy Kyle Wayne Dinkheller”